As published in PEDIATRICS®, the journal of the American Academy of Pediatrics, the study was conducted on children aged between 3-4 years old to determine the efficacy of the unique blend of DHA, PDX^ + GOS and Yeast Beta-Glucan. These are the findings:

Children consuming milk fortified with DHA, PDX^ + GOS and Beta-Glucan▲ have been shown to have more school days, giving them more opportunities for learning.

What is Yeast Beta-Glucan?

Beta-glucans▲ are a family of polysaccharides, of which substances made up of many individual sugar molecules linked together. It is naturally found in the cell walls of baker’s yeast, certain fungi, cereal grains such as oats and barley, mushrooms and even some algae.1 Different foods include different types of Beta-glucan▲. The type of Beta-glucan▲ better known for its ability to enhance the immune system is the beta-glucan▲ derived from yeast. This type of beta-glucan▲ has been present for thousands of years in the diet of humans, including children, as part of leavened bread products2. Because of its ability to help support natural body’s defenses, Yeast Beta-Glucan may complement other nutrients to promote immunity. You can find more information about Wellmune Beta-Glucan▲ at www.wellmune.com 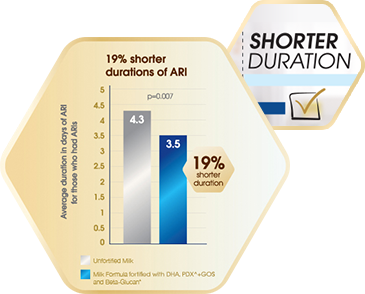 Milk Can Help with Faster Recovery

PDX^ is a more complex-chain dietary fiber that is fermented relatively slowly and to a lesser extent. With the slow rate of fermentation, its effect is throughout the large intestine rather than only the proximal part.4 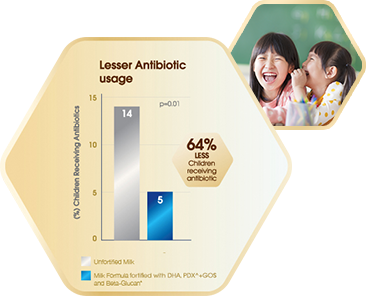 PDX^ and GOS work in tandem throughout the large intestine. Dietary fibers may foster the growth of good bacteria and help support digestive health.4. PDX^ can be found as an ingredient in foods and beverages such as baked goods, nutrition bars, yogurt and milk.3

Scientifically Formulated For Your Child's Amazing Potential
Nutrients, like DHA, provides benefits for the child's brain development. Unlock their potential by...
Learn more
5 Facts about PDX^ Every Mom Should Know
What is PDX^? PDX^ stands for Polydextrose, a dietary fiber. Dietary fibers feed beneficial...
Learn more
Learning Through Stimulation and Play
Stimulation and play help your child learn, through interaction with toys and people such as...
Learn more